By Mark Horner on October 2, 2002 in Courts, Documents, Forensics

A day for opening arguments and five witnesses 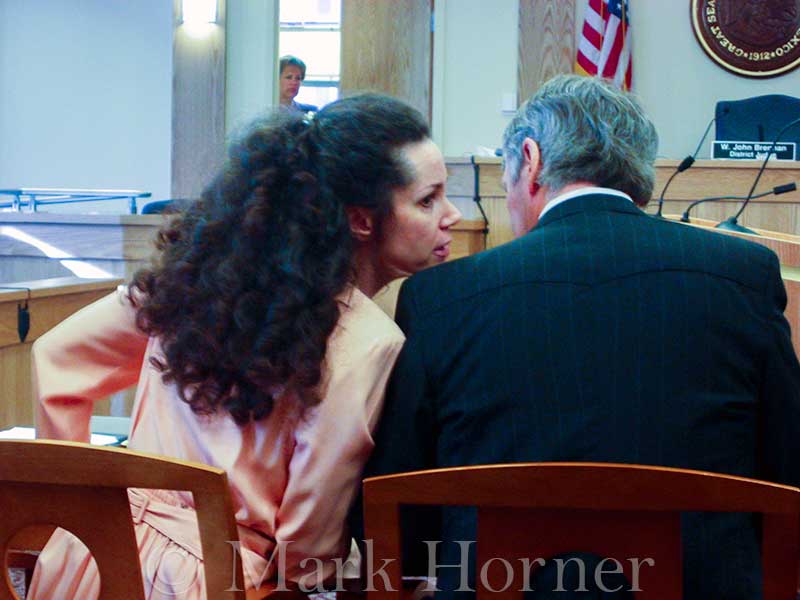 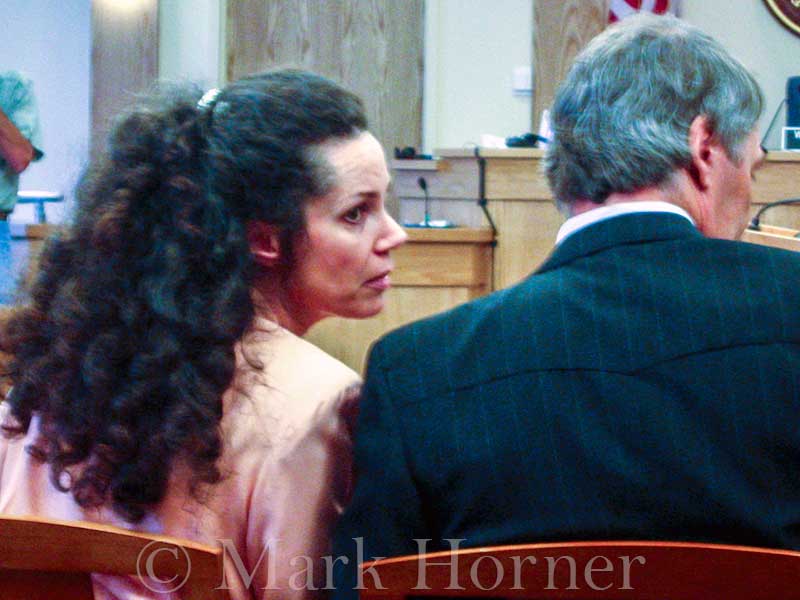 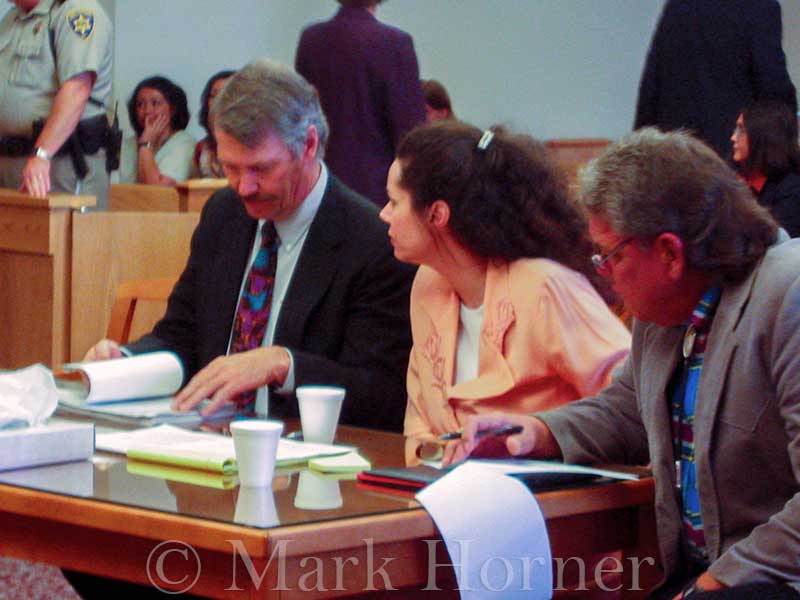 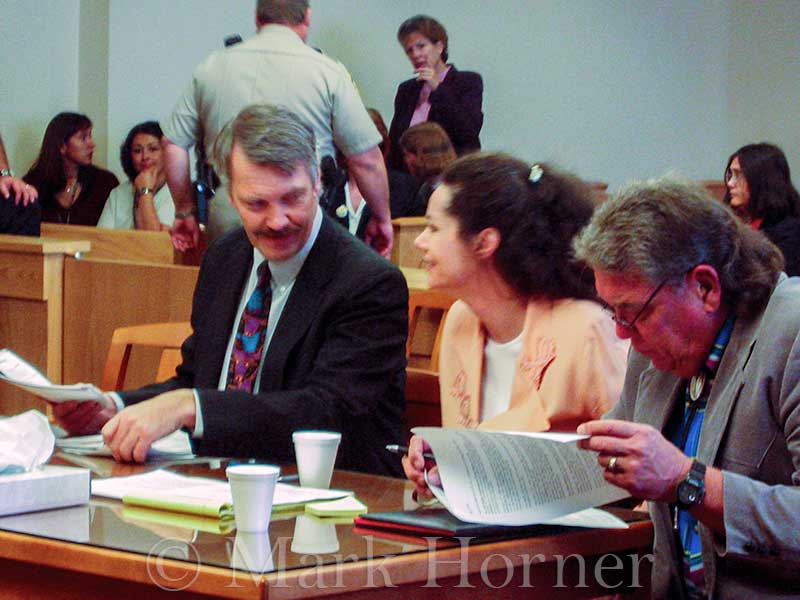 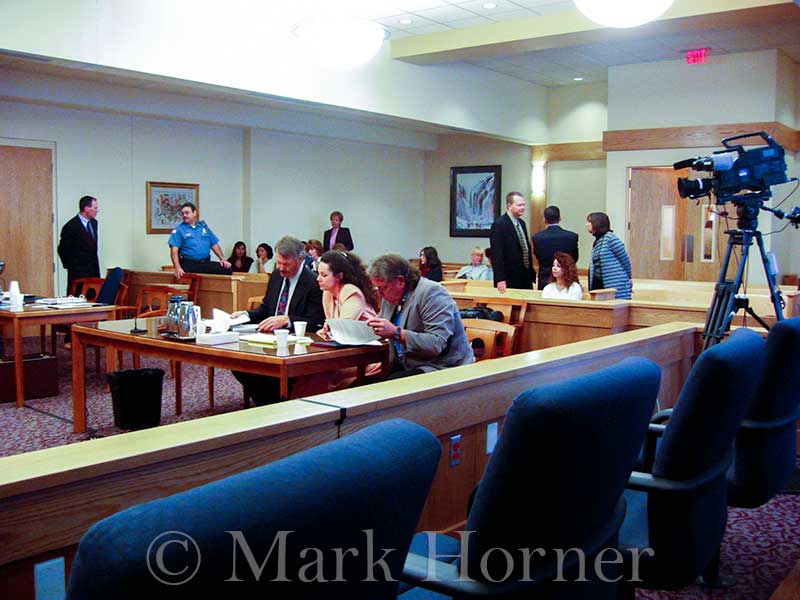 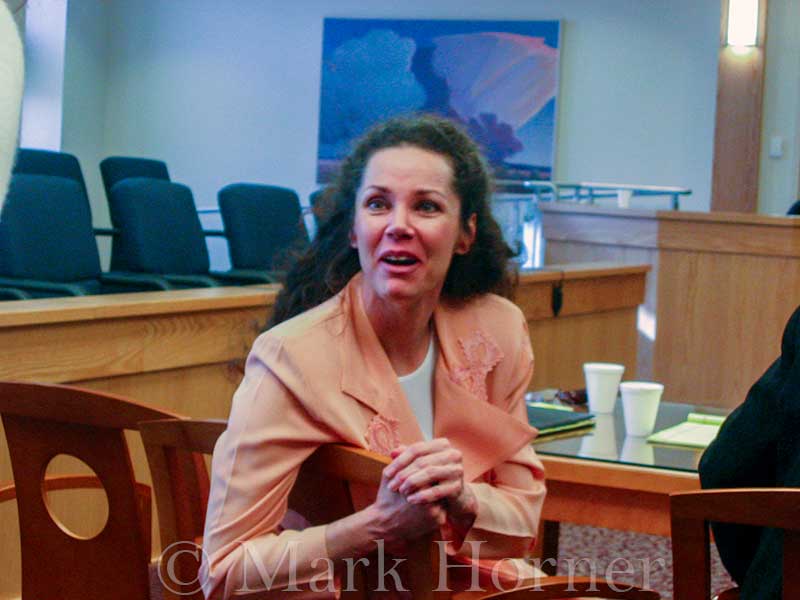 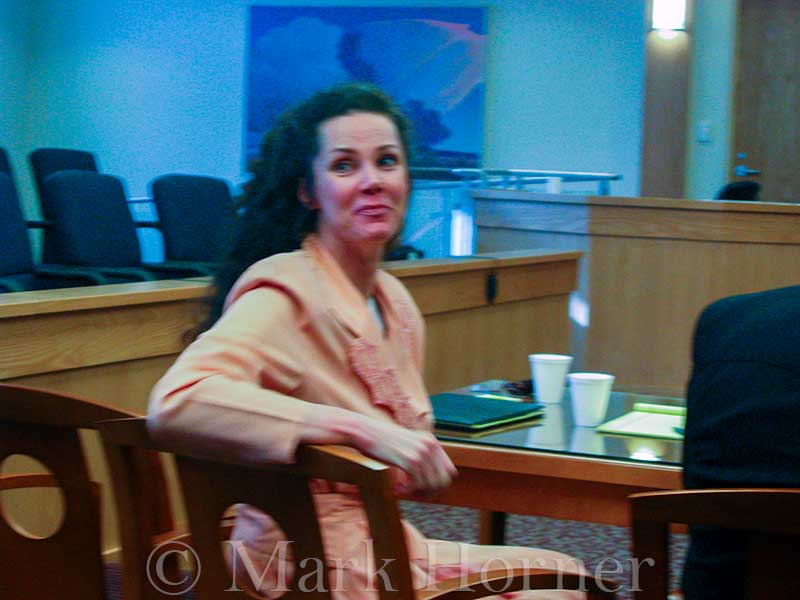 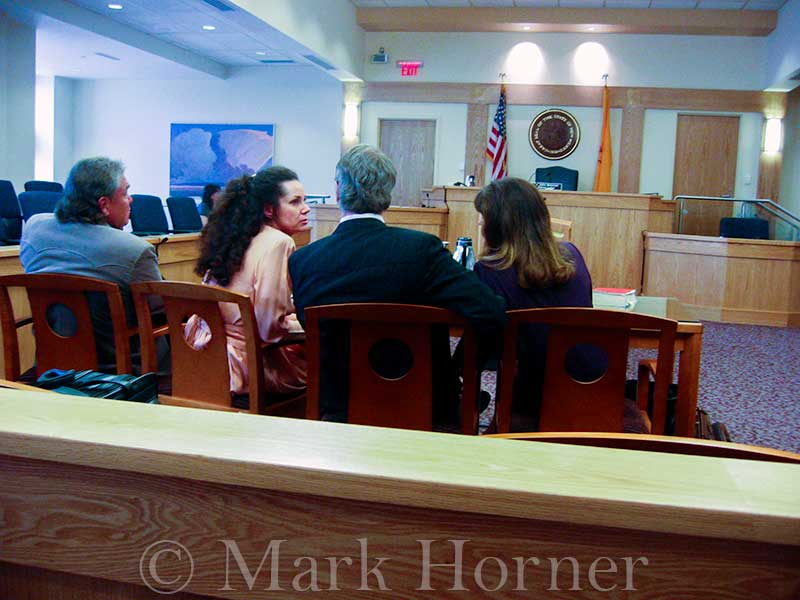 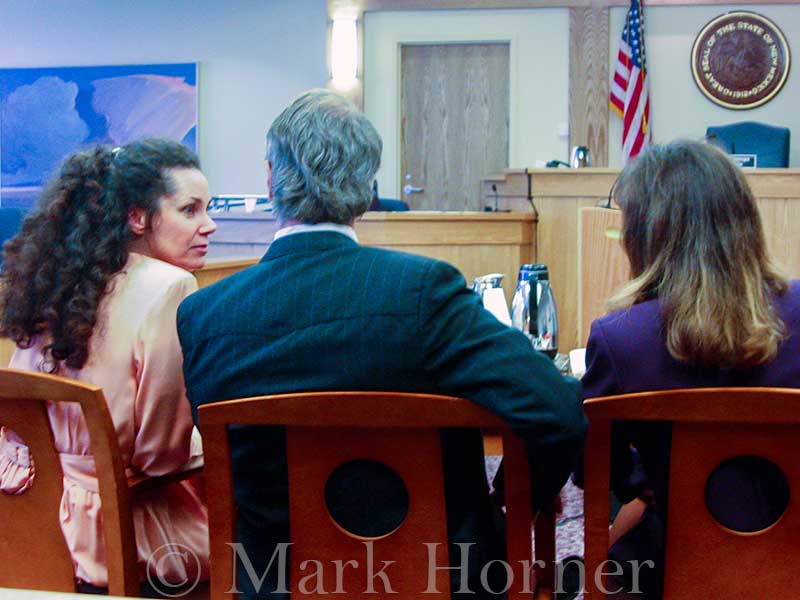 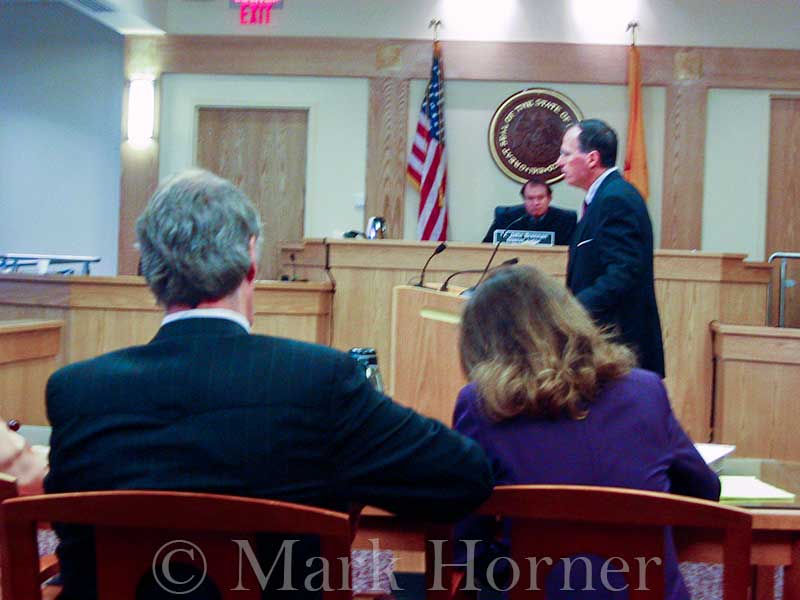 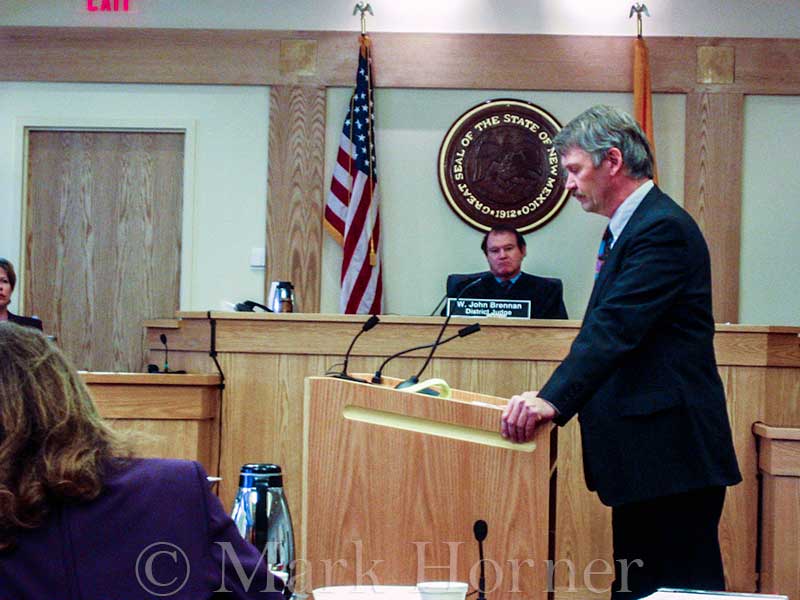 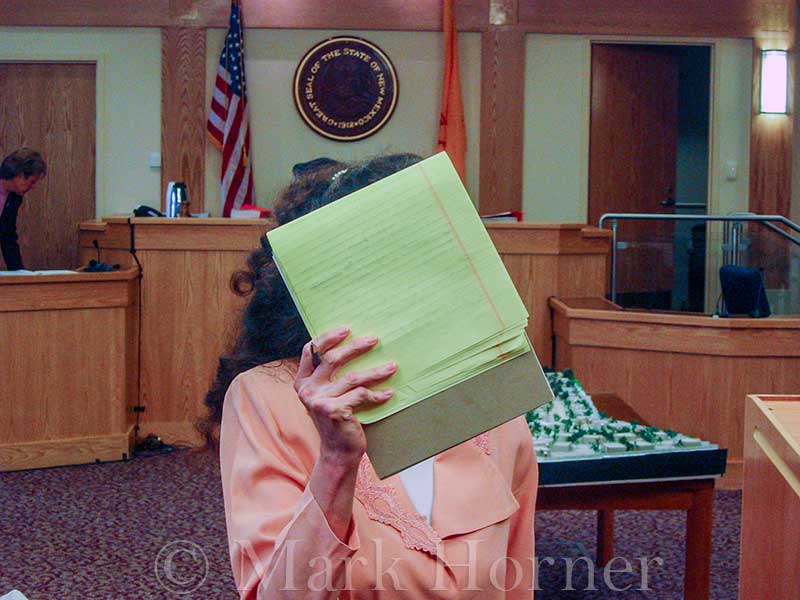 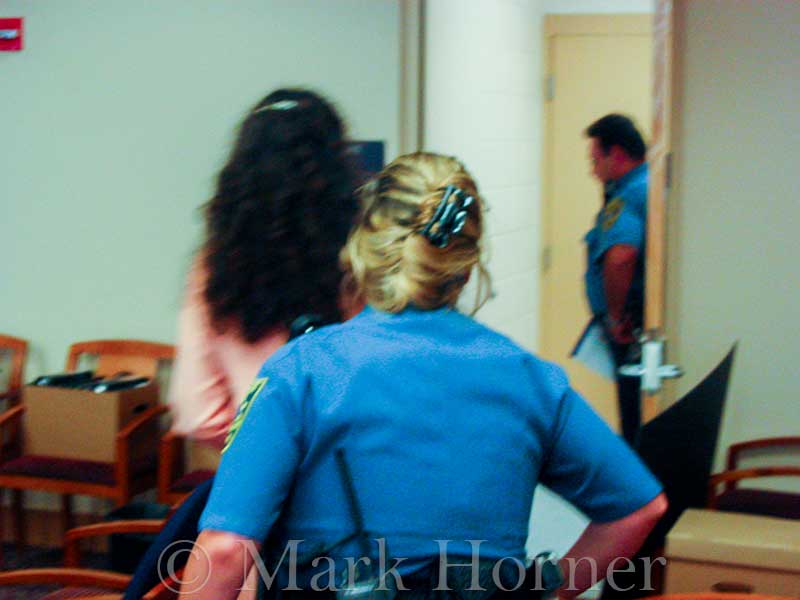 (Albuquerque) Presumably beginning with a blank canvas, the jury in the Linda Henning murder trial Tuesday witnessed two drastically different attempts at painting a picture of the defendant who, if convicted, could become the first woman sentenced to death in New Mexico since the 1800’s.

Prosecutor Paul Spiers told the jury that the “universal theme” of the case is murder. He told the jury that Henning and her boyfriend, Diazien Hossencofft, had a “marriage of converging needs.” Spiers explained that Hossencofft wanted his wife dead so that he would not have to give her a $57 thousand property settlement in their fast approaching divorce settlement. The prosecutor added Henning was attracted to the plot to kidnap and kill Girly Chew Hossencofft so that she could prove to Mr. Hossencofft that her love for him was “bonafide.”

Spiers also told jurors that Henning’s blood was found inside Girly Chew Hossencofft’s apartment. Investigators have long said Girly was kidnapped inside her apartment on the early evening of September 9, 1999.

However, Henning attorney Gary Mitchell insists the blood was “planted” in the apartment by Diazien Hossencofft. Earlier this year, Hossencofft told police he emptied a vial of blood in the apartment the night of the kidnapping with hopes of confusing investigators. Hossencofft, who often pretended to be a medical doctor, was known to keep vials of blood in his refrigerator. He told investigators he goofed the night of the kidnapping, because he thought he was contaminating the scene with another woman’s blood, not Henning’s.

The prosecution came into the trial planning to call on 52 witnesses. The jury heard from five of them Tuesday. Kathy Freeman, the branch manager at the Bank of America where Girly worked as a standout teller, testified first. Freeman says Girly feared Diazien was going to kill her. Freeman’s previously told investigators that Girly told her a terrifying story. She says Girly explained to her that Diazien often bragged that Girly would die soon and that no one would find her body. Freeman explained that she even moved Girly to a different branch with hopes of protecting her from Mr. Hossencofft.

Rosella Ernestine (“Ernie”) Johnson is the close friend Girly often confided in. Mrs. Johnson testified second. She says she spoke with Girly every night on the telephone. Johnson says she called Girly “about ten times” between roughly 7pm and 9pm on September 9th, 1999. She says Girly never answered the telephone. Johnson says she thought Girly might have gone to the movies so she didn’t worry. The next morning, though, fear did arise. Girly still wasn’t answering her phone around 6am. Johnson says she eventually called Kathy Freeman at the bank that morning to see if Girly had arrived at work. She hadn’t. Girly was never late for work. In fact, she’d previously warned Freeman to call police if she was ever late. Freeman wasted no time calling police.

The first Albuquerque policeman to respond to Girly’s apartment (#53-D of the Valle Grande Apartments located at 8401 Spain NE) on the morning of September 10th, 1999 was Officer Tim Portwine. Sergeant Edward Ade would soon be assisting in the investigation that day. Both Portwine and Ade testified Tuesday. Each described the strong smell of bleach inside Girly’s apartment. Upon entering, they say they soon discovered three large, moist circular areas on the carpet (two about the size of “grapefruits”, the third approximately the size of a “basketball”). Some of the wetness appeared to be a light red in color. The prosecution says it was blood. Henning’s blood was found nearby, uncontaminated, in very small droplets on the skirt of Girly’s new couch.

The final person to appear on the witness stand Tuesday also entered Girly’s apartment that morning. Bill Orth was the first person to enter Girly’s apartment to check on her welfare. At the time, Orth managed the apartment complex. He testified that he initially noticed nothing suspicious. 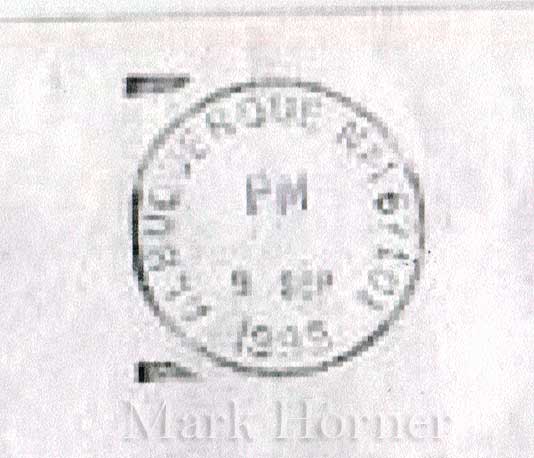 When prosecutor Spiers began his opening argument, the words were instantly familiar and not entirely his own. Spiers immediately began, “It’s getting a little cold now at night. Autumn is here now and we have say goodbye to summer…”
The words are from the last known letter ever written by Girly Chew Hossencofft. She wrote it to her parents in Malaysia. It’s believed she mailed it at the post office after work on September 9, 1999…about two hours before she was attacked inside her apartment.

*The family of Girly Chew Hossencofft provided me with the original letter in November of 1999 and allowed me to make a copy of it before returning it.
Before the jury enters the courtroom Tuesday morning, “Court TV” has its camera in place. The program is taping the Henning trial and plans to air it at a later date.

Another suspect in this case, Bill Miller, appeared in court as a spectator Tuesday morning. A grand jury has indicted Miller on five charges of tampering with evidence. No trial date has been set, although both Miller’s attorney, Ray Twohig, and prosecutor Paul Spiers say they’re hoping to try the case in December.