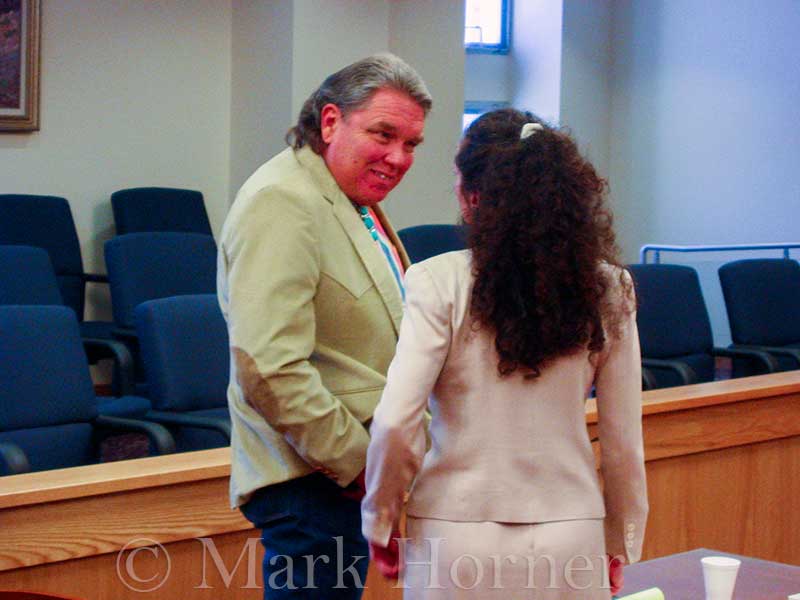 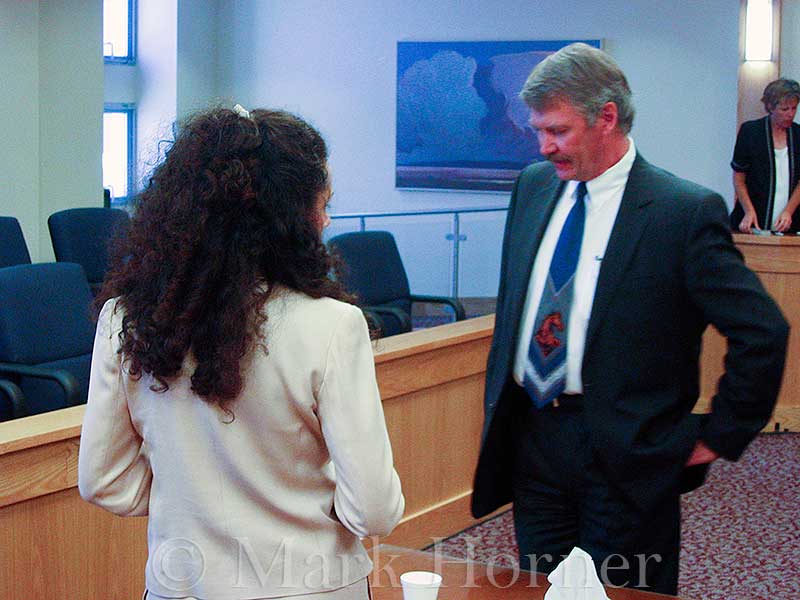 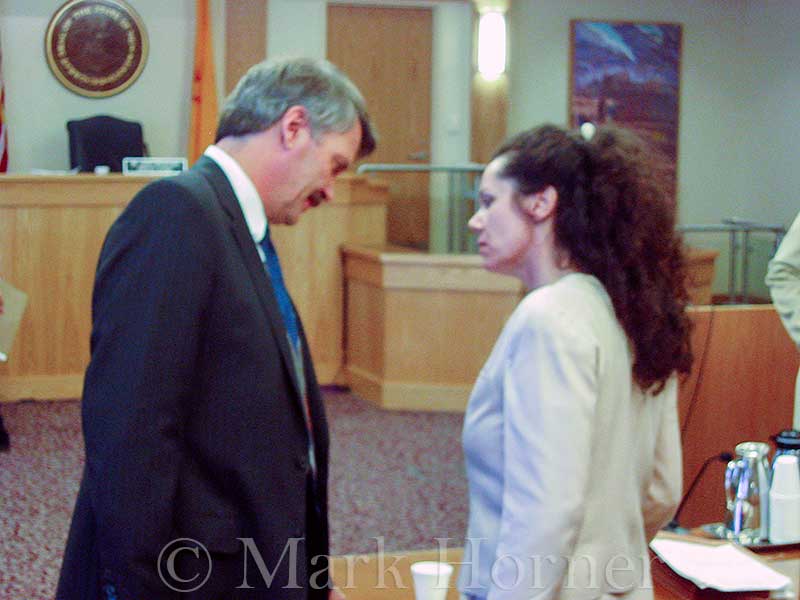 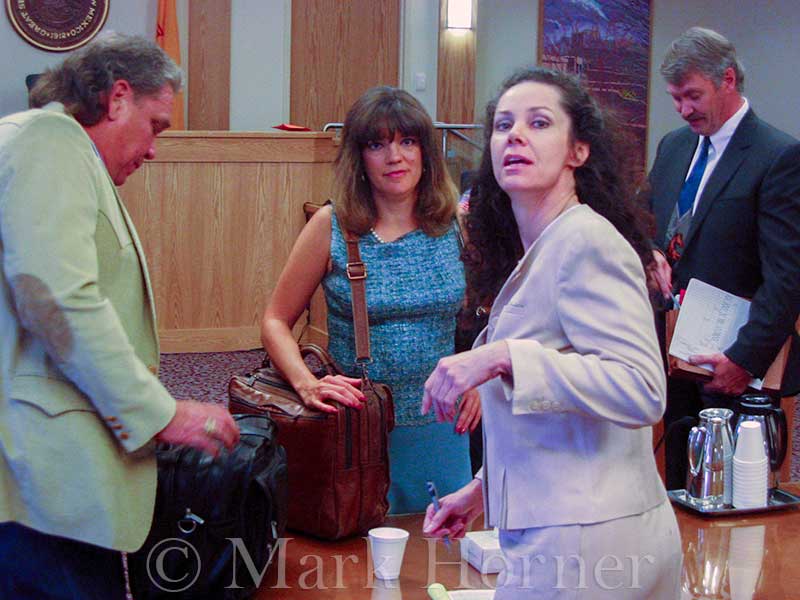 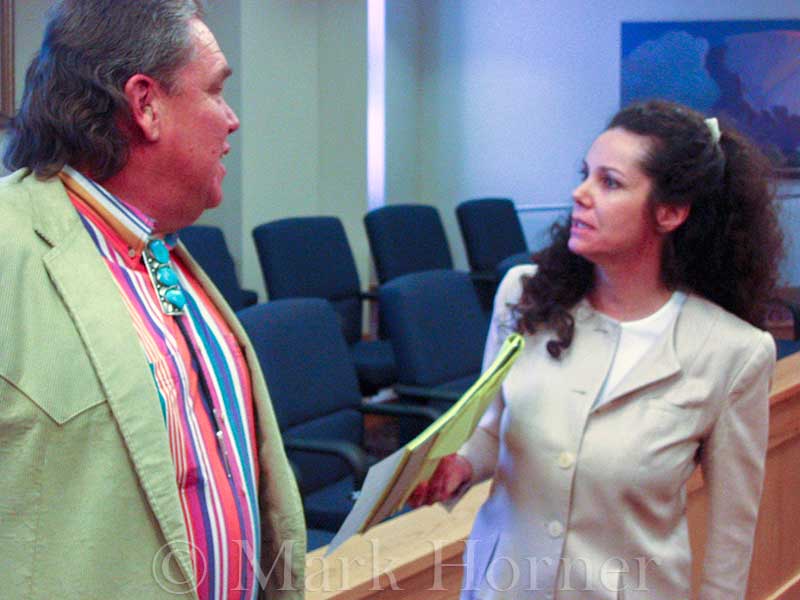 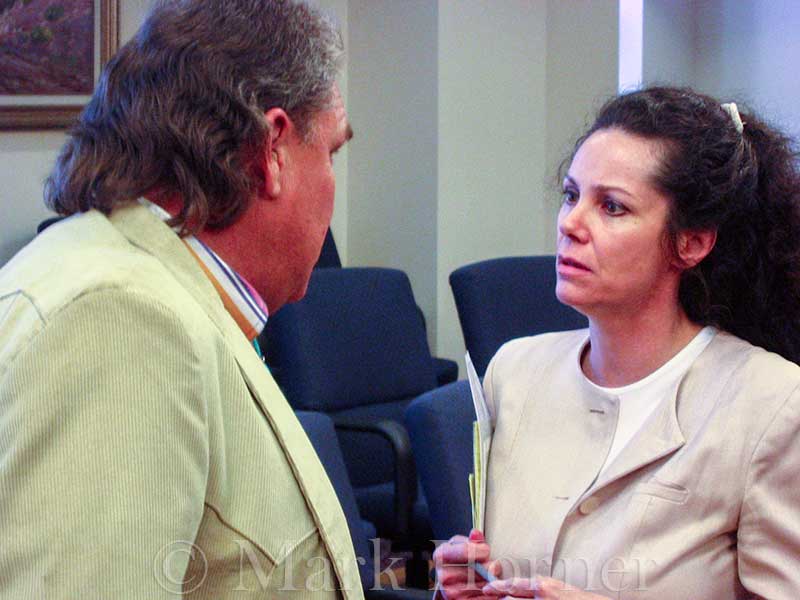 (Albuquerque) Thursday’s final round of questions from defense attorneys to about 50 prospective jurors in the Linda Henning murder trial ventured into now-familiar territory: Extraterrestrial beings.

“Does anyone here believe life exists in outer space?” asked Henning attorney Monica Baca. Two people quickly spoke-up, stating that it’s likely that some form of life exists beyond earth. The responses seemed to provoke a slight smile of approval from Henning. Moments later, another potential juror interjected, “If someone thought that there were aliens around us living in people, I would think that that person is nuts.”

By noon, though, a jury of 12 men and women had been selected. Four alternates were also chosen. Opening arguments are now scheduled to begin Tuesday morning. If convicted of murdering Girly Chew Hossencofft, Henning could become only the second woman to be executed since New Mexico became a territory in 1848.

Henning has previously claimed that many political leaders and well-known celebrities are actually reptilian aliens who “shape-shift” into human form. I began my research into these bizarre claims shortly after Ms. Hossencofft disappeared in 1999. I soon found a low-budget television documentary that presents many of the disturbing claims often presented by Henning. Turns out the video had previously received repeated airplay on a local government access television channel. The video’s host and narrator is an Englishman named David Icke. Icke seems to have a cult following. As I recall, claims made in his documentary include a story that former president George W. Bush and the late Queen Mum are among the shape-shifters (called the Illuminati) who’ve huddled together in secret to consume sacrifices of human babies. Reminds one of the movie, The Matrix.

Henning attorney Gary Mitchell downplays the significance of anything resembling The X Files. “A lot has been made of all the information about extraterrestrials and that sort of thing,” Mitchell recently told the Albuquerque Tribune. “But I’m just an old-time criminal defense attorney…I look at witness and facts and motive and whether anybody has done this stuff,” he said. “I look at my client as a good businesswoman. She had a good life.”

And now Henning appears to be feeling good about her approaching trial. Moments after the jury had been selected Thursday, she paused before leaving court so that I could record a brief statement from her. I carry a small digital still camera that also happens to record video clips. Here is a transcript of that statement:

Henning: “I’ve just waited three years to go to trial and now I have my chance. And I’m just tired of being tried by the press. And now it’s time for us to fight back. That’s what a trial is all about.”

Horner: “Anything about aliens in all of this?”

Henning: “Oh, I’m sure there’ll be an alien or two on the witness stand.”

Henning: “We’ll try to keep the aliens out of the jurors.”

It is apparent that Henning has put on weight over the past several months. Previously, she appeared to be losing significant weight while in custody. Before leaving court Thursday, Mitchell remarked to me that Henning’s looking “great”. I asked him if he could explain her healthier appearance. Mitchell said Henning is now receiving an improved, special diet in jail. He said she’d previously been fed a diet low in nutrition, including a lot of potato chips.

The Bernalillo County Detention Center is the Albuquerque jail where Henning is being held.